The bicycle of a unique champion, Gianni Bugno, Bugno is a Legend, this bike used in the 1993 season during the Giro d’Italia. This bike is unique, unique details, built by Bianchi for Gianni season ’93 in Team Gatorade. 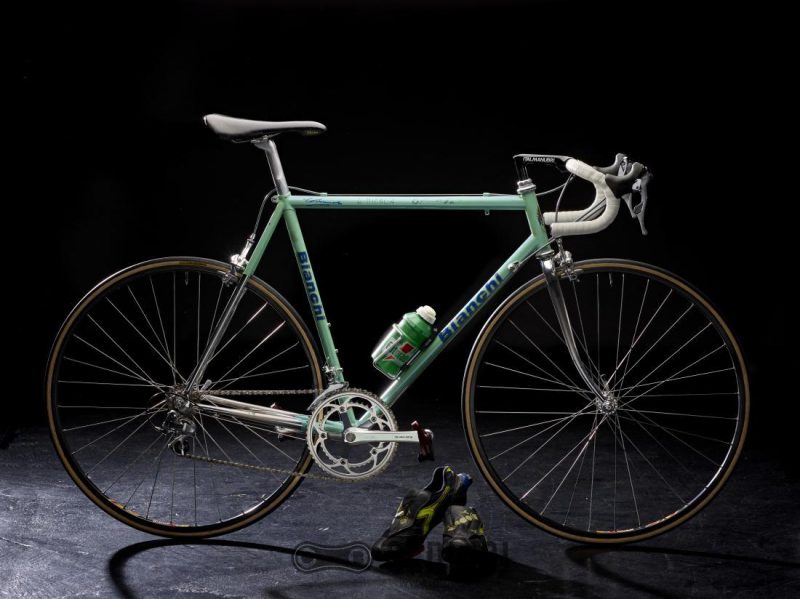 The world of racing has always been Bianchi‘s playing field, outside of a brief and recent reflective pause. For its return to racing the brand from Treviglio has launched a renewed production of frames and racing models by creating a new company, the Bianchi Reparto Corse Srl, that has the stated goal of designing and production the line of bicycles destined to be ridden by professionals and those who desire a bike of this level. The continuity of the traditional characteristics of each piece is assured by the structure of the Reparto Corse, that is equipped with the most modern research and development technology available. Frame production is instead trusted to the human element, where the experience and sensibility of an artisan cannot be substituted by a computer. 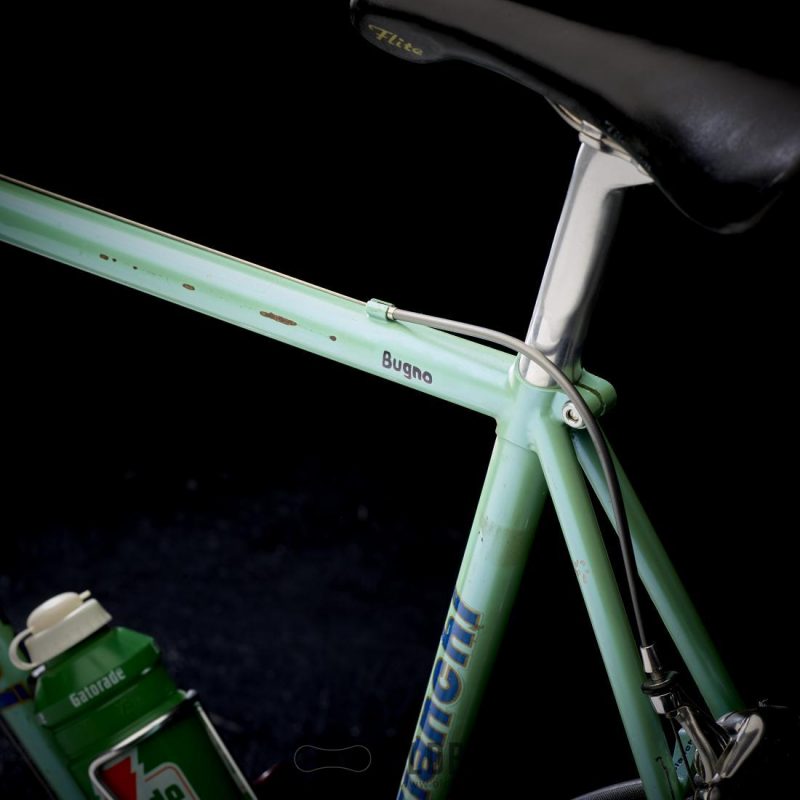 This machine is called “Cromovan Dura Ace“, and the name of course is made up from the tubing and component group chosen for the occasion (by which can be substituted upon request). The frame is assembled with Oria Cromovan tubing, a blend of steel with chrome, molybdenum and vanadium. It is a cold drawn tube, double butted with wall thicknesses that range from .5mm to 1mm, depending on the location. The center sections are slightly ovalized, in particular the top and down tubes, whose elliptical sections are oriented opposite each other. The contrasting forces should resist twisting and loss of power through flex, assuring the rigidity of the parts subjected to torsion and lateral hits: all without neglecting the right flexibility to absorb impacts from the terrain. The profile of the down tube increases the torsional rigidity necessary for sprinting and steering stability, limiting its work to compression and traction. A subtlety of Cromovan tubing is accompanied by a high strength (120 kg per cubic mm): the result is a frame that weighs between 1600 and 1800 grams, plus 650-700 grams for the fork, depending on the size (this complete bicycle weighs under ten kg). It saves a few hundred grams in respect to the standard, which are useful to the rider who rides thousands of kilometers during the year, and all this without affecting the stability and durability of the bike. 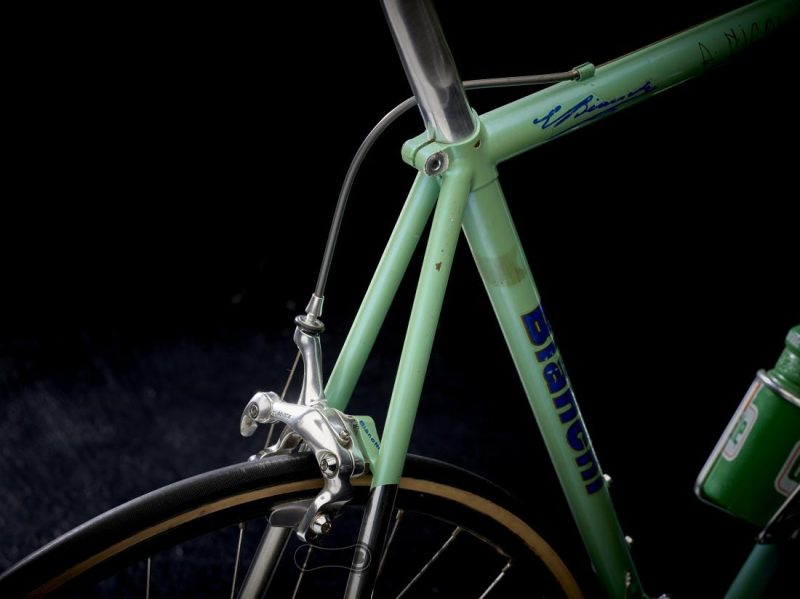 The qualities of the Cromovan tubing that permit both a rigid frame with the appropriate flexibility for comfort are maintained by the choice of Tig welding. 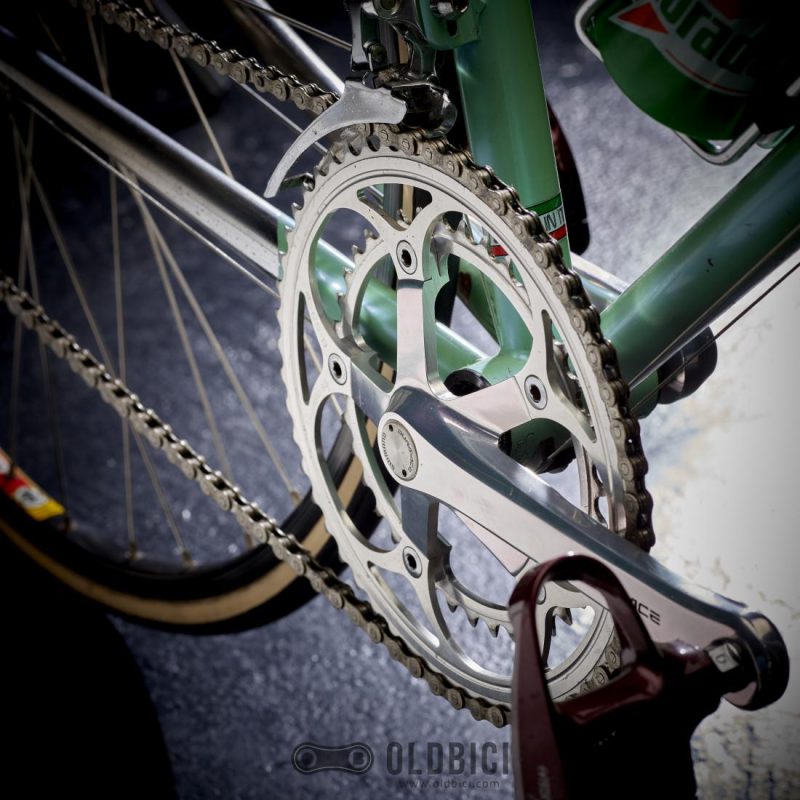 This Cromovan is equipped with Shimano Dura-Ace 7400, the Dura Ace STI with Dual Control shift/brake levers: these shift onto an eight speed, 12/21 Hyperglide freewheel and the new crankset (the big ring has six shifting ramps on the inside that facilitate upshifts; also the bb axle has been narrowed, resulting in a smaller distance between pedals) with 175mm arms and 39/53 teeth. The dual pivot brakes are very effective, while the pedals are LOOK ARC PP 196. The saddle is Selle Italia mod. Flite Titanium, stem ITM 400 and handlebar ITM Mod. Super Italia Pro 2 with tape SILVA Ambrosio. 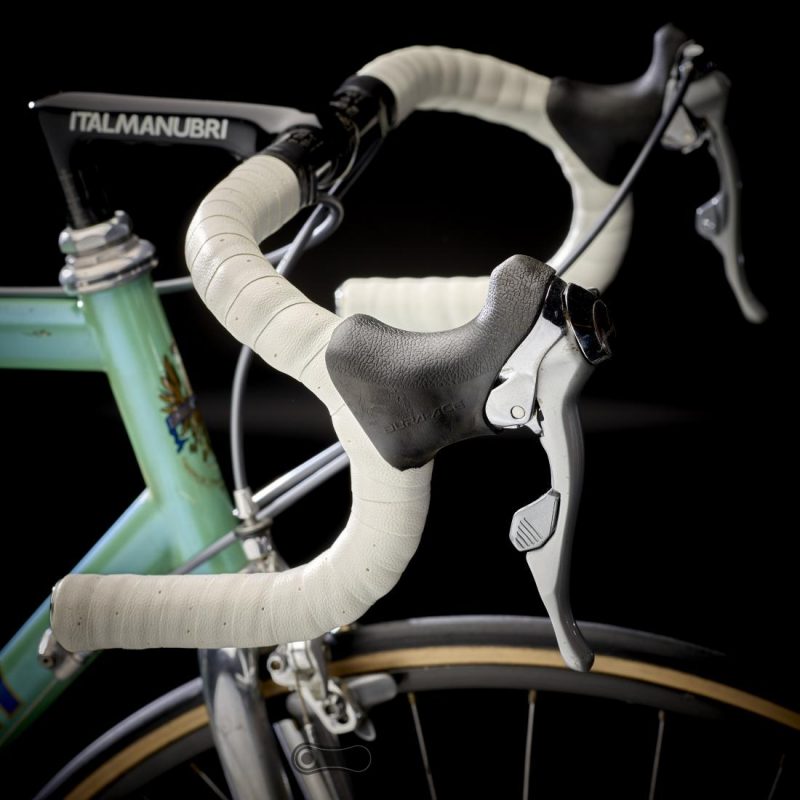